During the current construction use the alley behind the store to access parking and enter the store through the rear entrance. 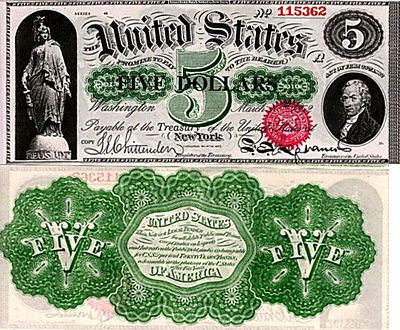 The first greenbacks were paper money produced by the United States during the Civil War as “US Notes”, and ultimately used until 1996, when United States Notes were replaced by Federal Reserve Notes.

Greenbacks were paper money produced by the United States during the Civil War. The first greenbacks printed were called “Demand Notes”, and were produced in 5, 10 and 20 dollar denominations, and were used tp pay expenses in the Civil War, as well as the salaries of government workers and the military. Then in 1862 the First Legal Tender Act was passed, and the treasury produced and circulated $150,000,000 of the first United States Notes. However, unlike previous gold and silver certificates for which the bearer could demand payment in gold or silver, US Notes were the first legal tender backed solely by the authority and  reliability of the United States government.

But when the government offered to convert greebacks to gold or silver in 1879, there was little response from US citizens, marking the turning point when US Notes were considered “as good as gold”.

Green ink has been so widely available, stable, and not prone to fading, that the public has come to equate the green bills with stability, so US Notes have retained their green coloring to this day.